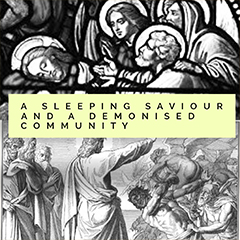 “A sleeping saviour and a demonised community”

A prophetic word for the body of Christ in Australia.

35 On the same day, when evening had come, He said to them, “Let us cross over to the other side.” 36 Now when they had left the multitude, they took Him along in the boat as He was. And other little boats were also with Him. 37 And a great windstorm arose, and the waves beat into the boat, so that it was already filling. 38 But He was in the stern, asleep on a pillow. And they awoke Him and said to Him, “Teacher, do You not care that we are perishing?”

39 Then He arose and rebuked the wind, and said to the sea, “Peace, be still!” And the wind ceased and there was a great calm. 40 But He said to them, “Why are you so fearful? How is it that you have no faith?” 41 And they feared exceedingly, and said to one another, “Who can this be, that even the wind and the sea obey Him!”

Then they came to the other side of the sea, to the country of the Gadarenes. 2 And when He had come out of the boat, immediately there met Him out of the tombs a man with an unclean spirit, 3 who had his dwelling among the tombs; and no one could bind him, not even with chains, 4 because he had often been bound with shackles and chains. And the chains had been pulled apart by him, and the shackles broken in pieces; neither could anyone tame him. 5 And always, night and day, he was in the mountains and in the tombs, crying out and cutting himself with stones.

6 When he saw Jesus from afar, he ran and worshiped Him. 7 And he cried out with a loud voice and said, “What have I to do with You, Jesus, Son of the Most High God? I implore You by God that You do not torment me.”

And he answered, saying, “My name is Legion; for we are many.” 10 Also he begged Him earnestly that He would not send them out of the country.

11 Now a large herd of swine was feeding there near the mountains. 12 So all the demons begged Him, saying, “Send us to the swine, that we may enter them.” 13 And at once Jesus gave them permission. Then the unclean spirits went out and entered the swine (there were about two thousand); and the herd ran violently down the steep place into the sea, and drowned in the sea.

14 So those who fed the swine fled, and they told it in the city and in the country. And they went out to see what it was that had happened. 15 Then they came to Jesus, and saw the one who had been demon-possessed and had the legion, sitting and clothed and in his right mind. And they were afraid. 16 And those who saw it told them how it happened to him who had been demon-possessed, and about the swine. 17 Then they began to plead with Him to depart from their region.

18 And when He got into the boat, he who had been demon-possessed begged Him that he might be with Him. 19 However, Jesus did not permit him, but said to him, “Go home to your friends, and tell them what great things the Lord has done for you, and how He has had compassion on you.” 20 And he departed and began to proclaim in Decapolis all that Jesus had done for him; and all marveled.

Prophecy for the body of Christ

Contrary and buffeting winds have come across the body of Christ in this nation. Many are panicking and running frantic across the land trying to awake Christ in the church but have found Him to be asleep.

Some have begun to faint in their hearts and question wether God even cares about what is going on. This season has been sown by lethargy and a self-reliance in the church as well as an assault by the powers of darkness to trap an entire generation of souls. Though there is a definite demonic assignment in this scheme it has been allowed by God in His providence to come upon the body of Christ at this time to awaken her to attention and focus her back onto Christ in her midst.

If the body of Christ will have eyes to see and ears to hear she will discover a heightened dimension of the power of God in her midst that she has not experienced for many generations in this land.

The answer and way that God will move will astound her and she will see the Son of God afresh in a manner that will prepare her for the greater battles of the kingdom that lay ahead of her. It is a day of standing firm and also great humbling before the hand of God for the body of Christ in the land.

The current battle is just a part of a greater journey of kingdom advance that the body of Christ will need to engage in in the days to come. Irrespective of how the current crisis outworks itself the thing that remains true no matter what is that the general societal climate of the nation has run towards a much more secular and humanistic position.

The false securities of political politeness and even moral moorings have become unhinged and will slide into deeper demonic allegiance for the immediate season in front of us. However this will provoke a time of great encounter between a demonically manipulated culture and a faith filled Christ focused church that will bring the answer of hope, deliverance and freedom from the bondage that many will find themselves in.

Their will come a time of great desire for refuge to be provided in the body of Christ from the demonic bondages and depravity that popular culture will have embraced.

As society begins to find hope, refuge and salvation within the dimensions of the Christ communities, there will come a bewilderment by the civic leaders who thought that they had given society all the freedoms from moral standards and eternal truths that they had cried out to them for.